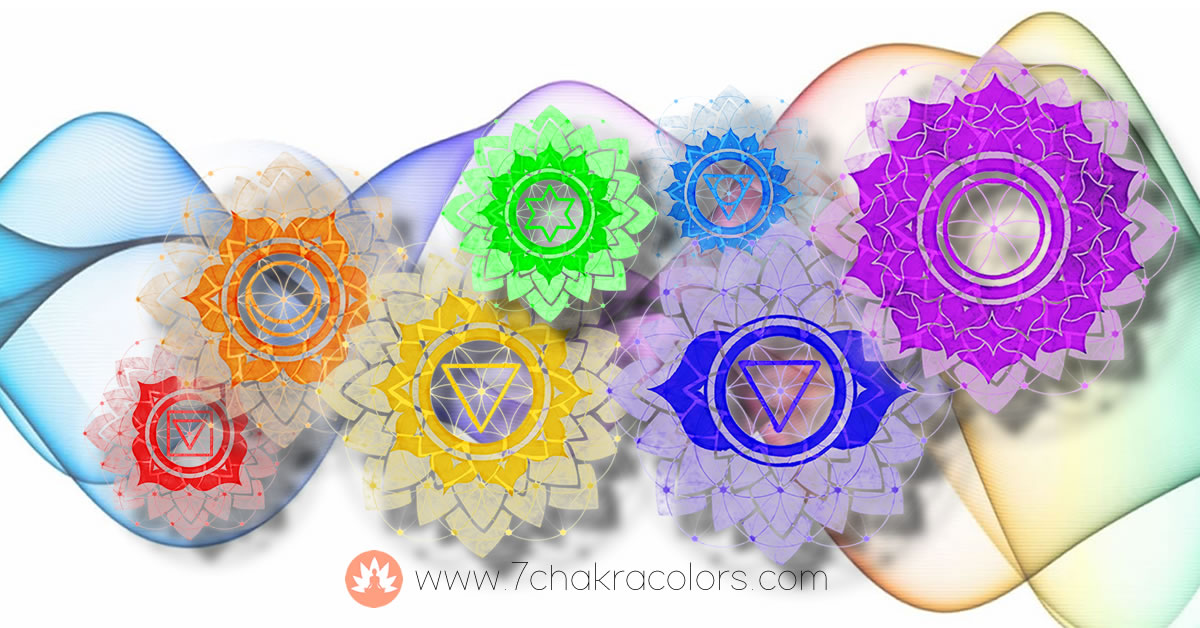 Learn everything you need to know about chakra colors and how to use them to balance and lift your energy. Gain control over your body, mind and spirit by utilizing the power of chakras and their colors.

Discover the meanings of chakras and their energy functions and learn practical ways of chakra balancing and healing.

Learn which chakra colors, stones and gemstones, healing tools, yoga poses, and mudras can help you release your blockages and improve your overall well-being.

What are The Chakra Colors?

Chakra colors represent a visual perception of frequencies or vibrations of the seven main chakras in the human body. These vibrations can be observed as colors in your auric field. The colors of chakras correlate to the rainbow color spectrum of light.

The colors of chakras can be seen in a human aura by training your peripheral vision.

What do the chakra colors mean?

Here are the seven chakra colors explained in a clear way. Each color is connected to a specific chakra and it has its own meanings and properties.

Learn more about each chakra color meaning below: 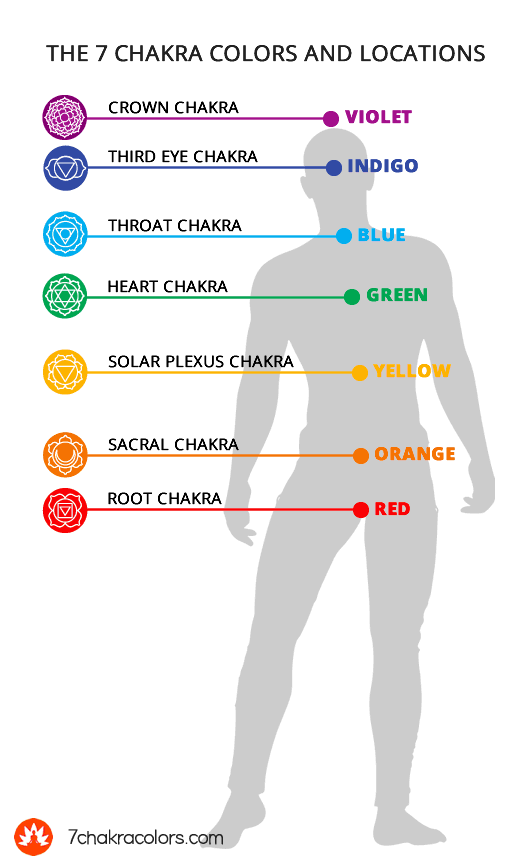 Chakra Colors in Order From Root to Crown

Chakra colors ordered from first (root) to seventh (crown) are the following:

Introduction to the Seven Chakras for Beginners

Regardless of your age or gender, spiritual orientation or beliefs, you can learn how to manipulate your chakra energy and use it to your advantage.

However, to bring your energy centers in alignment some work is required. First of all you need to know what you are doing, and secondly you need to be aware that chakra balancing is a process that will take some discipline and time.

Nevertheless, the benefits of having your chakras fully open are extremely rewarding and can positively impact your life on all levels – physical, mental, emotional and spiritual.

Are you ready to manifest the life you deserve?  Firstly, read more about what is a chakra and its function.

What are my Chakra Colors?

You can test your own chakra colors by answering yourself a few simple questions which are listed below.

To fully benefit from the healing power of color you need to develop your personal color awareness.

A life of a healthy individual is filled with a balanced array of colors. You have to be in tune with your personal rainbow assortment to develop color consciousness and explore the healing potential of colors.

Find out which colors are lacking in your life and which are over saturated. Take the test to learn about the colors of your life.

Keep a diary of colors to gain insight into the effects of color on your physical and mental well-being, emotional state, activities, and relationships. Take notes on the colors and color combinations you wear and encounter in your surroundings and pay attention on the way they make you feel.

Where do Chakra Colors Come From?

The concept of chakra colors was first presented in the 1970’s by an English writer and philosopher Christopher Hills.

He was a versatile scholar and practitioner of esoteric traditions who has linked the theory of chakras with the light frequencies and vibration.

His ideas were vastly accepted and nowadays the understanding of chakras is intimately linked with colors and frequencies, not only within western energy healing practices, but also in eastern traditions.

The theory of chakra colors is based on connection of chakras with the colors of the light spectrum (rainbow) and vibrational frequencies of specific colors.

Everything in nature has its universal logic, and in particular, on the level of energy and vibration, there are always co-relations. For example, these relations exist between frequencies, colors, sounds, and when speaking about perception also levels of consciousness.

Why CHAKRAS HAVE COLORS?

Chakras have colors because they vibrate with different frequencies. Each chakra has its own density and pulse which can be perceived as color, sound, or even a feeling.

Chakra colors and their order correlate with seven colors which compose the sunlight. These colors are: red, orange, yellow, green, blue, indigo, and violet.

You can observe these seven colors when you project the light through the glass prism. A prism breaks the white light into different colors, because each of these colors has a different wavelength.

Red color has the longest waves, which means it has the lowest vibration or frequency.

Violet color has the shortest waves, which means it has the highest vibration or frequency.

Chakra colors and other related aspects are a part of chakra science which helps us understand chakras, their meanings, and properties.

Chakras and Colors of Your Aura

Most of you would have heard about aura, our astral or etheric body – the three-dimensional glow that surrounds our bodies.

Aura is often understood as energy which is projected from our chakras. Aura reveals the physical, mental, and spiritual state of our being. 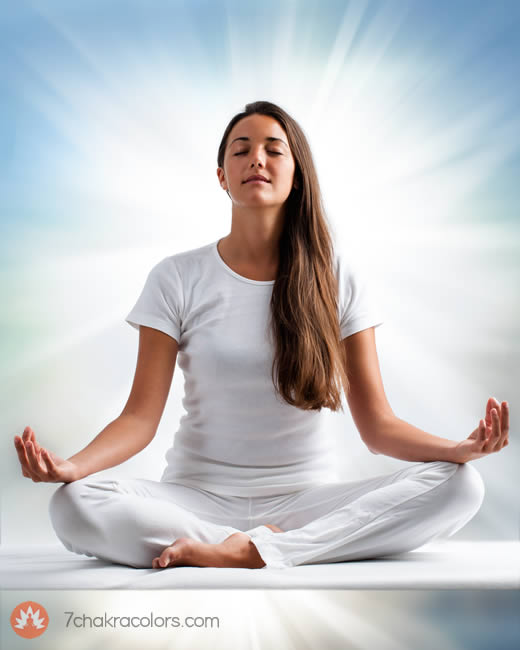 Can You See Chakra Colors?

You can see your chakra colors in your auric field.

In normal circumstances, an aura is invisible, seen only by exceptionally sensitive or clairvoyant people. However, anyone can learn how to see aura by following a few simple exercises.

When your chakras are balanced, they are channeling the energy which is sourced from the universal energy field and distributing it throughout your body. Your aura colors are bright, and the structure of your aura is consistent and without ‘energy holes.’

If your chakras are out of balance and not functioning properly, they remain partially or completely closed to energy and therefore cannot receive or distribute it.

These problems manifest as dark blemishes on your aura. Problems in energy distribution result in the physical, emotional and mental disorders and can lead to serious health issues.

Most holistic healing practices share the notion that all diseases stem from a disturbed balance of force in our spiritual body. They show at first as mental conflicts or emotional issues and, if unaddressed, proceed to manifest as physical illnesses as well.

If you react to negative experiences by blocking your emotions, the flow of energy that runs through your chakras will be disturbed, and imbalances will occur.

Color therapy and list of health issues connected to each chakra

The use of colors for healing and therapeutic purposes is not new. It is something that was practiced in the past and continues to be relevant to this day. Our ancestors perceived light as a source of life and the driving force of life’s processes. In fact, light equaled health of the body, mind, and spirit.

Healing with colors was rediscovered in the beginning of 20th century and color therapy was approached from a scientific standpoint. Since then there have been many advances, such as for instance photo-dynamic therapy, which is a used in cancer treatment.

The light we see is a composite of colors – the 7 chakra colors: red, orange, yellow, green, blue, indigo, and violet and white. These colors had an important role in ancient cultures, especially in healing practices.

Let us take a look at some of the most important colors and their effects on our physical health and psyche.

Red is the color of your root energy. It helps you connect to the earth and ground yourself. By increasing the flow of the red energy, you will feel more strong, secure, and stable, both physically and on the emotional and mental level.

Bring more RED into your life by:

Orange color will stimulate your creativity and joy for life. It increases your inner awareness and helps you recognize your deepest desires. By surrounding yourself with the orange color you will find yourself becoming more in touch with yourself and you will start manifesting your creative expression. 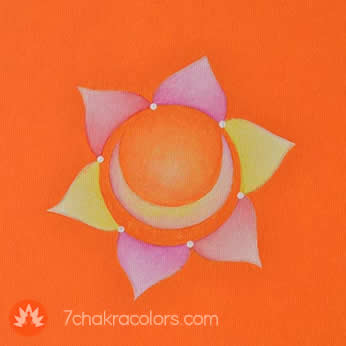 Introduce more ORANGE into your life by:

Yellow collow will bring you power, focus and inner strength. By establishing a stronger connection with the yellow color you will gain more energy in your everyday life. You will become more vigorous and decisive in pursuing your life goals.

Try to bring more YELLOW into your life by:

By focusing more on the green color you will become more relaxed. The stress and tension will dissipate as you will gain more trust in yourself. You will feel supported and loved by the universe. Things will start flowing in the right direction with ease, as you will follow your heart.

Introduce more GREEN into your life by:

Surrounding yourself in blue, wearing blue clothes, gazing at the sky, and swimming in the sea, will strengthen your connection with the blue color. Blue color opens up your throat chakra and supports your process in expressing yourself socially and verbally.

You should bring more BLUE into your life by:

Meditating on indigo color can take you deep inside yourself. This color strengthens your connection to your intuition and inner awareness. You will be able to recognize the truth and see through the hidden meanings of things. The doors to spiritual dimensions will open up.

Try to bring more indigo into your life by:

You must bring more VIOLET into your life by:

Tired of dull blades that don't cut? Get the sharpest Damascus kitchen knives for only fraction of the cost at Damascus Steel Store.

Any cookies that may not be particularly necessary for the website to function and is used specifically to collect user personal data via analytics, ads, other embedded contents are termed as non-necessary cookies. It is mandatory to procure user consent prior to running these cookies on your website.